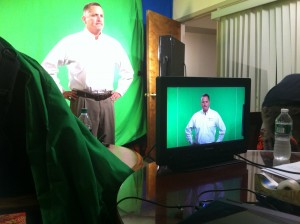 Rick getting ready to deliver his lines

Recently we here at PJ Fitzpatrick have been re-gearing some of our advertising to showcase the actual personnel that work here.  You may have seen our ads in the News Journal featuring pictures of our repair specialists, and we’ve continued with that trend in our television commercials.  Our most recent ad features company President Rick Stover introducing the company to the viewer.  We have a couple behind the scenes videos from the commercial re-shoot we thought we would share with you here.

No really hilarious bloopers in there, but we have a few of the outtakes that weren’t used in the finished product.  You’ll find the finished television spot linked to below.  Besides the candy cane stripes behind him at one point (whose idea was that?) we think it turned out pretty good.  You’ll be seeing more commercials and ads with our staff featured coming very soon!

The post Behind the Scenes: Shooting our New TV Spot appeared first on PJ Fitzpatrick.